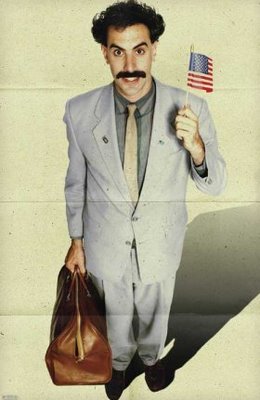 I finally saw Borat tonight, and found it far more disturbing than I had expected.

It also struck me how much fear is tied in with the ethnocentric. We create a strong division between us and them, which naturally brings up fear. And that was very clear in the movie, to the point of people reacting with fear (sometimes expressed as anger) even when he walked up to people to give them an innocent kiss on the cheek…!

And it was a reminder of how many in today’s world are mainly at ethnocentric, including here in the US. Not that it is a surprise (US domestic and foreign politics is rife with ethnocentrism, in a large number of areas – from homophobia to racism to islamophobia to we-are-the-greatest and everybody-for-themselves attitudes.) But in a world that is in great need (on a relative level) of worldcentric solutions, it does not look so good.

Not what I expected from this movie, but maybe more what I needed than just comedy.