I imagine that famous people or people who are in the public eye are more aware of this than most of us.

Other people don’t see us. They see their images of us. And sometimes, they put a lot into that image that’s not exactly how we experience ourselves.

And that’s how it is from our end too. We put our own images on other people, and also on ourselves, situations, and the world.

We see our images, not the person in him or herself, not the situation in itself, and not the world in itself.

tagged: images, world of images
Through inquiry, this can become quite clear:

Images and words give sensations meaning.

Sensations give images and words charge.

Here are three ways to look at mental images:

The first one may be easiest in the beginning, and sometimes the third (when looking at body images). The second may the most natural and easiest with time and experience.

We can also do several things to help the mind “get”in a more visceral way that it’s a mental image:

In our western culture, we have tended to see parts of our world as inferior – nature, animals, our bodies, women, children, future generations – and treated it accordingly. We split the world in our minds, take this imagined split as reality, see one part as less valuable than the other, and then take this imagination as true as well.

There are historical, cultural, philosophical and religious reasons for this.

More immediately, it’s about the images we have in our own minds. Images transmitted from our culture, and that are there whether we consciously agree with them or not.

So it can be very helpful – and illuminating – to explore these images, for instance through the Living Inquiries.

When I bring my body to mind, what images do I see? What words? What sensations are connected to these images and words?

I see this as an important part of illuminating the stereotypes we all carry with us, and – at least somewhat – live our lives from, whether we are aware of it or not.

Note: In our western culture, influenced by a certain version of Christianity, we tend to split the world into good and bad, less valuable and more valuable. And the dividing line has been drawn between body and mind, women and men, children and adults, nature and humans, future generations and the current generation, with the former of each of these pairs seen as less valuable, less important, less respectable. And that’s behind many of the troubles we see today. For instance, we couldn’t have developed such a deeply unsustainable way of doing business, economics and production if it wasn’t for images in our minds telling us that (a) there is a split between humans and nature, and (b) humans are more important than nature. This is what has allowed us to pretend, for a while, that we operate separate from (the rest of) nature, and that we can mistreat nature without mistreating ourselves in the same way.

END_OF_DOCUMENT_TOKEN_TO_BE_REPLACED

It may be obvious, and yet perhaps not completely for most of us. It may not be seen thoroughly, felt thoroughly, and lived thoroughly. There is always more to explore and let sink in.

And the same with the world. That too is a projection.

END_OF_DOCUMENT_TOKEN_TO_BE_REPLACED

I am still exploring what happens when there is identification with the image(s) of a doer and/or observer.

There is obviously identification with a story, in this case the doer/observer images.

It is localized in space, in my case in and around the head area. The sensations here serve as “anchors” in space for the doer/observer images.

END_OF_DOCUMENT_TOKEN_TO_BE_REPLACED

The world I see and relate to is my own world of images. It is what happens in the sense fields, with an overlay of images to help this human self orient and function in the world.

All of this is my own world of images, helping this human self to make sense of and function in the world.

And I can notice it as it happens. I can notice that overlay of time and space. Of a me relating to other people and the wider world in general. Of an I doing as this human self, or observing as awareness itself.

It is amazing and beautiful.

And I notice how I see myself in three ways here…

I see and relate to my own world of images, whether I recognize them as an imagined overlay or take them as true.

I see qualities and dynamics out there, in the wider world and the past and future, that are also here, in this human self.

And all I see is awakeness itself. What happens in the sense fields and the overlay of images, including the images of me and I, is all the play of awakeness.

END_OF_DOCUMENT_TOKEN_TO_BE_REPLACED

Exploring the sense fields, it is pretty easy to get a sense of how we imagine the world.

The mental field creates an overlay of images of what is here (in the other sense fields) and what is not here.

And that world of images is – in a very real sense – my world, when they are taken as true.

In the beginning, it may be easier to notice this through a sense field exploration session. Sitting or lying down, and notice how the mental field creates image overlays on each of the other sense fields (interpretations), and also how the past and future is imagined in the same way.

Again, it is pretty simple, but can have a profound effect when recognized throughout daily life. I notice – in an immediate way – how the drama is created and happens within my own image overlay.

It is, quite literally, imagined.

If it is not recognized as imagined, there is a sense of being caught up in drama. The image overlay – including that of a doer and observer – seems very substantial and real.

When it is recognized as imagined, the layer of drama tends to weaken or fall away. And what is left is the image overlay as a very helpful – and essential – tool for my human self to function in the world.

END_OF_DOCUMENT_TOKEN_TO_BE_REPLACED

Here are a couple of hdr examples which do not look the way most hdr images do. I used the hdr image as a starting point for creating a more expressive image, and chose to lose information in both light and dark areas to serve that purpose. Hdr images are useful here for allowing a wider range of exploration.

I haven’t used my film SLR camera for several years, and one of the reasons was my frequent disappointment with the limited dynamic range of the photos. Very often, details in the light or shadow areas were lost, merging into a flat white or black hole in the picture. The only remedy was to get out my camera only in low contrast conditions such as overcast weather, or just before sunrise and after sunset. Even then, the shadows or highlights would often lose detail.

With digital SLRs, it is now easy to take high dynamic range photos, provided the subject doesn’t move too much. Since I got my first digital SLR a couple of weeks back, I have experimented some with HDR and am surprised of how easy it is to get decent results.

The hdr workflow is simple:

Here are a few more details:

Here is a scene that normally has too high contrast: a wall in the shade with a bright sky in the background.

I took three handheld exposures of this Portland street scene, using the auto-bracketing feature on my camera. The first image is normally exposed, and the two following under- and over-exposed two stops. (Three exposures and two stops either direction is the maximum on my camera, which is OK but a little limited for hdr photography. Five exposures and three or four stops cover a greater range and may be needed for extremely high contrast scenes.)

Normally exposed image with good details in the mid range.

Underexposed image, with details in the sky and clouds.

Overexposed image with information in the darkest shade areas.

I then imported them to Photomatix, and got this result on the screen. Moving the cursor over the image shows the area details in a separate window. (I have included two examples, one of details over the door and one in the clouds.) Photomatix automatically align the source images, and does a good job even with handheld exposures.

The hdr combination of the three source images, with information in the lightest and darkest areas.

And tone mapped it using the tone compressor option, and experimenting with the different settings to include as much information in the final image as possible.

The colors on the tone mapped image can get a little weird (it depends on the settings you use), so for the final editing, I like to keep the normally exposed source image up on the screen as a color reference. I used level, curves, color balance and hue adjustment layers for this image, and also masks to treat the sky slightly differently from the rest of the image. The final editing in Photoshop gave this result:

The final image, after editing in Photoshop. I went for a vivid but still relatively realistic look.

If you have questions, I’ll be happy to answer to the best of my (very limited) ability. Just post them below.

Here are some resources I found helpful when I first explored it:

During the most recent CSS retreat, the teacher mentioned how thoughts are most embedded in the visual field, as opposed to the other ones (sensations, taste/smell, sound).

When I explored it for myself, I found that thought seems equally “embedded”, or rather laid on top of, each of the sensory fields. In my case, and I assume this is somewhat common, there is a layer of visual thought images put on top of each sensory field: There is a sound, and a faint image of a car is put on top of it. A taste, and an image of the nose/mouth/throat area and an apple. A sensation, and an image of an ankle with a mosquito bite.

This is the same for each sensory field.

What is different, is that with the visual field, visual thought images are put on top of visual perceptions. There is visual on top of visual, which can make it more difficult to differentiate the two.

Some thought-images of self I notice through choiceless awareness…

We went for a three-day snowshoeing trip along the rim of Crater Lake this weekend (click on the images to view full size or see more Crater Lake photos). 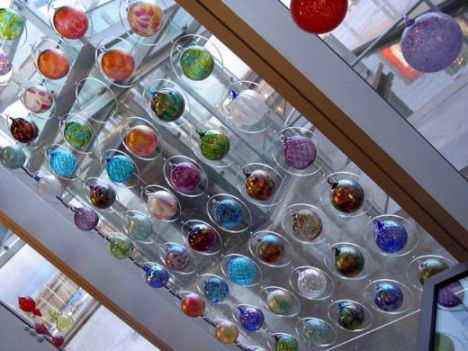 I recently went through some old photos and decided to make them into a few slideshows. The page is especially designed for stimuli-seekers (actually, it was just more convenient to put them all on one page.)

By continuing to use the site, you agree to the use of cookies. more information