I worked on a dream involving a superhero and his achilles heel, and uncovered in the process a quite obvious parallel between superhero stories and individualization. 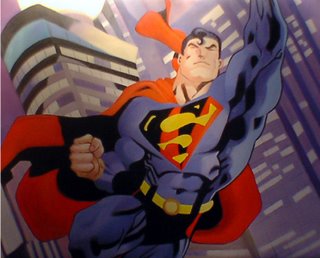 There are typically three elements in a superhero story: the person’s conventional identity (often mundane), the superhero, and the adversary – either a situation or a supervillain.

The same three are in each of our lives. We have a conventional identity – the persona, our face to the world. We have the amazing and desirable qualities and abilities, developed and used to varying degrees. And then there is the disturbance, the apparent adversary, the shadow – those qualities in us that do not fit our conscious identity.

And the process of individualization involves familiarizing ourselves with each of these, allowing each of them their life, and finding the larger whole which is there beyond and including all of these. This is also the centaur level, in Ken Wilber’s terminology.

Sometimes, the polarity may be so strong – in my dream Superman and kryptonite (!) – that the only whole that can hold it is the Ground, emptiness – going into the transcendent realm.