This blog is on summer vacation, although here is a brief break in the silence. 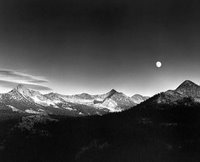 I walked up to the street just now to put out the recycling, and saw the moon against the pale blue sky and framed by clouds lit up by the setting sun. For a while, there was just pure perception.

Byron Katie asked are you ready to lose the moon?

And what is lost is only the stories about the moon, the mythology of it, the overlay I place on it: it is a planet, it is romantic, it is up in the sky, it circles the Earth, it has phases, I remember when I watched the moon with my girlfriend by the coast that one time, it is beautiful, humans have traveled there and walked on it (the first time in July 1969), it looks larger closer to the horizon…

And if there is not even the story of I, then that is all. There is the moon arising within and as clarity and awareness. That is all. And not even that.

There is just what is, arising within and as clarity and awareness.

tagged: the work of byron katie