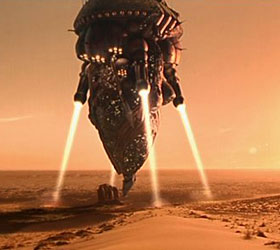 Although The Fifth Element is a sci-fi comedy, it does have an interesting core story. Evil is approaching, and only the four earth elements along with the fifth element, the divine, can save us.

How does that mirror what is going on right here, in me?

This evil also has an alien quality, as in the movie. I become less human, more obsessive, my view and concerns narrow, I am more willing to ignore my natural empathy and compassion for myself and others.

In the movie, the only way to stop evil from destroying earth is the five elements: earth, water, air, fire and the divine.

For me, this is the deeply and ordinarily human. The inclusiveness of all that we are, as Earthly beings composed of the four elements, and with the element of the divine included.

As the movie pointed out, attacking evil only makes it stronger. If we attack it in ourselves, we only amplify the narrowness and obsessiveness that gives birth to it in the first place. If we blindly attack it in others, their narrowness and obsessiveness, and anger and resentment, is only fueled and directed back at us. (A good example is of course the “war on terror” which, in its current form, only fuels resentment and hatred.)

So the only remedy to evil when it arises in ourselves is to find ourselves as a more fully human being, to connect more with the whole of us. And when it arises in others, to remain in contact with and act from our own deep humanity: our compassion and empathy, as well as our decisiveness and action. An action that comes more from clarity and less from blind reactivity.

(In dealing with terrorism, this could mean to strengthen international cooperation and use legal means, as we would do to deal with any other form of criminal activities committed by smaller groups of people.)

Fortunately, there is no lack of tools to connect with our more inclusive humanity: The many forms of body-oriented practice, such as Breema. Allowing the mind to unwind and everything come and go on its own, through mediation. The many forms of self-inquiry. And maybe most importantly, the many ways of working with projections in general and the shadow in particular.