I have had a brief period where I again have read and listened to podcasts about UFOs, and came across the starseed idea. The description certainly fits me, and although the idea may seem outlandish and airy-fairy new-agey, is it really so impossible or unlikely?

What’s most amazing is that something is at all, and that consciousness is. Anything else pales in comparison. (That doesn’t mean that we should embrace any weird idea as true!) Also, is it stranger if we have several lives than one? And if we do have several lives, why wouldn’t the incarnations be at different locations – including different planets? After all, it’s very likely that the universe is teeming with life, including some that we would consider intelligent. If reincarnation happens, it’s likely to be many opportunities for incarnation throughout the universe.

I also see that there is no solid support for the starseed idea. It’s mainly speculative and supported by anecdotal data which can easily and reasonably be interpreted in other ways. My sense that it fits is just that – a sense, and it doesn’t necessarily reflect what may be real in a conventional sense.

I also see that the starseed idea is a projection. It says something about me. It’s a mirror. As anything else.

For some, it’s a comforting idea. A way to find safety. Just like any other belief. That’s good to notice. (It’s perhaps also a way to feel valuable, that we are OK.)

In the future, this may be a topic for research and science. Who knows. I would like to see reincarnation and other possibilities researched more seriously. 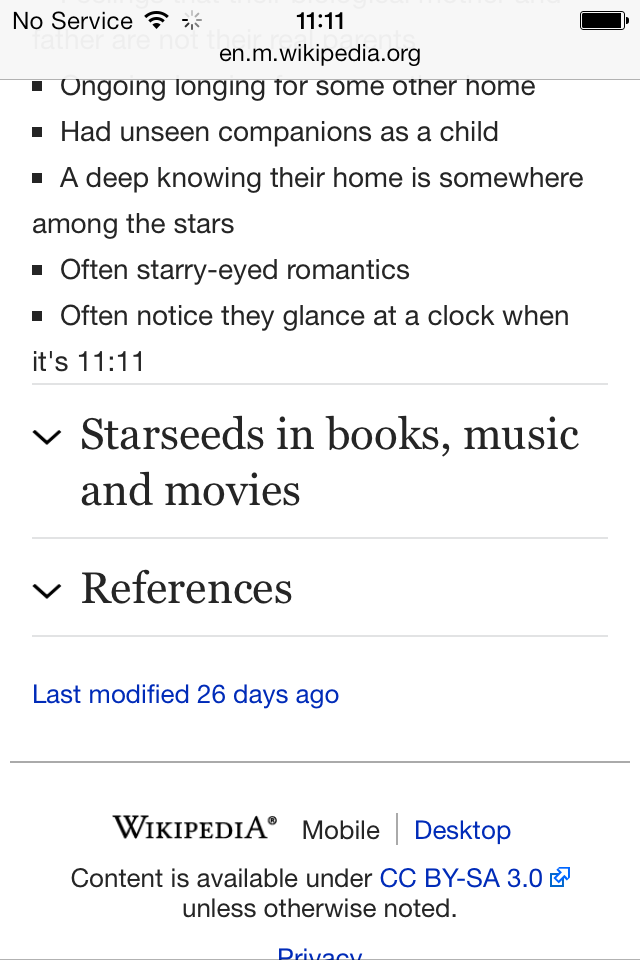 Since the initial opening/awakening in my teens, my life has – at times – been full of synchronicities. It seems to happen more when I follow my guidance and heart more closely in life and life decisions.

As I read the Wikipedia article about starseeds on my phone, I saw that the 11:11 synchronicity was mentioned. I looked up, and saw that the time was 11:11am.

See the screenshot above.

Synchronicities are common for anyone in a “spiritual process”. And UFO encounters are often included in the list of Spiritually Transformative Experience (STE), along with near death experiences, shamanic experiences, experiences triggered by some psychedelic substances, kundalini awakening, and spiritual openings and awakenings.