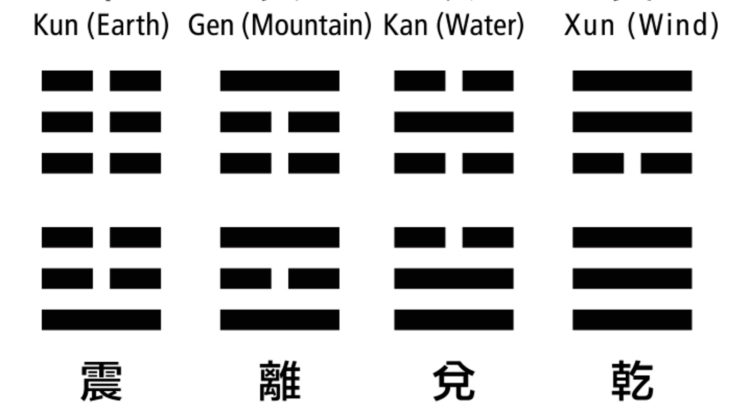 Synchronicities can show us when we are in some kind of flow in life. We can use them as a pointer. And we can also make use of them in the form of a Tarot or I Ching reading.

Here is one I was reminded of this morning.

When I was in my late teens, I got in touch with a man in Norway who became a kind of mentor for me. I initially contacted him for earth acupuncture services, we started talking on the phone, and he introduced me to I Ching.

He told me he had asked I Ching about me in general, and got 1. The Creative / Heaven and 56. The Wanderer, and talked with me a bit about those two hexagrams.

Within a day or two, I went into Oslo to get my own copy of I Ching (the Richard Wilhelm translation with a foreword of Jung whose writings I devoured at the time). When I came back to the house, my first question was the same, a general question about me. And I too got 1. The Creative / Heaven changing to 56. The Wanderer.

If I remember my middle-school math, I think it’s a one in about 4000 chance that we both got the same combination of lines. And that’s not so important.

What’s important is that it helped me trust my process a little bit more, and it certainly made me interested in the I Ching in general. I read my copy over and over for the next two or three years until it almost fell apart.

I also did use it as an oracle, although I quickly learned that I Ching would reflect the state of my mind at the moment more than anything else. And if I asked a frivolous question, or asked the same question more than once, I would typically get 4. Youthful Folly.

When it comes to the two hexagrams, the first – The Creative / Heaven – certainly seemed to fit then and now. And, at the time, I remember I didn’t like that it changed to The Wanderer. I didn’t particularly want to be a wanderer. But now, looking back, I see it was accurate. I have been a wanderer both literally and metaphorically. I have lived in several places in the world (these days, I am a Norwegian in the Andes mountains). And I have a deep curiosity about a wide range of approaches to healing and spirituality and have explored several of them.